Disney Princess Ariel gets plenty of criticism when it comes to her being a questionable protagonist: she’s slammed by feminists for giving up everything for a man, she’s slammed by parents for being spoiled, disobedient, and ungrateful, and she’s slammed by critics for not defeating the villain in her own movie and redeeming her mistakes, which yeah, that last one is disappointing. Other than that, I don’t really have a problem with Ariel. In fact, she’s one of my favorite Disney ladies, alongside Mulan, Anna, Lady, Belle, Esmeralda and Nala. She’s brave, exuberant, kindhearted, and has a real zest for life. All her life she’s been told humans are simple, amoral demons, but over the years she’s begun to realize they’re a lot more complicated than that, that they carry all sorts of potential, and sometimes they’re wonderful. Her crush, Eric, confirms all that for her.

Something I really like about Ariel is that her greatest strength is also her fatal flaw. She’s the type of person who’s not afraid to take risks and that’s a trait that’ll get her very far in life, but she’s also very stubborn and reckless, and like all good character flaws that comes back to bite her in the ass later. When it comes to her fascination with humans, her longing to be part of that world, and her dissatisfaction with the sea, I just want to say right now that there’s nothing inherently wrong with wanting more out of life than everything you’ve ever known. It’s what we all want really, otherwise we’d spend the rest of our lives living with our parents. The problem comes when she goes about following her dreams the wrong way, believing it’s the only way, and one mermaid’s dreams grows into something so much bigger than her and puts everyone in danger. And all it could have been avoided. 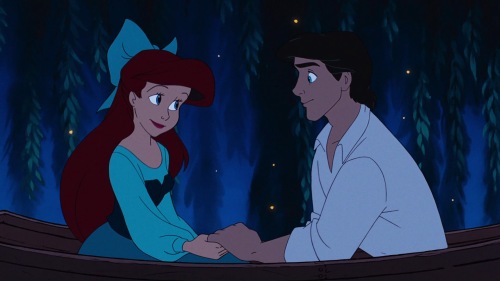 Just when Ariel’s ready to give up on her ambitions, she meets Eric. He’s the spark who relights the flame and makes it burn brighter and hotter than ever before in “Part Of Your World (Reprise)”.

Ariel often clashes with her father, King Triton, because they’re both stubborn souls and prone to doing foolish things; Triton from his closemindedness and Ariel from her impulsiveness. Ariel fears that no matter how old she gets, her father, the king, will never let her live her life the way she chooses, and instead she’ll be stuck where she is, filling the role he wants for her until she’s old and grey. It’s the same moral dilemma Disney would revisit with Remy and Django eighteen years later in “Ratatouille” *. A parent always wants to protect their child, but does that desire cross over into selfishness when the child comes of age and the parent wants to keep them from leaving the nest and taking the risks that always come with branching out; instead wanting them to remain where they are and spend years of their life pleasing the parent’s desires until the child grows to resent them? It’s definitely a grey area. Ariel is far too reckless and Triton does care for her, a lot, but she can also see that his prejudices are clouding his judgment and it’s having an unfair effect on her (which is a recurring thing with him. If you’ve seen “Ariel’s Beginning” and consider it to be canon, then you’ll know that Triton has a habit of pushing his issues onto everyone around him, including his own children, and making them miserable). 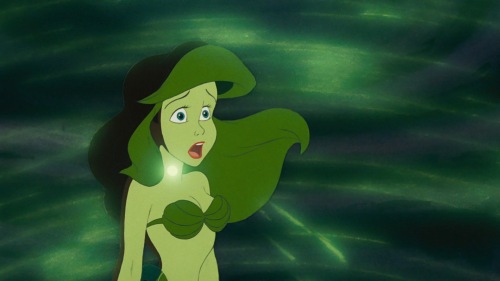 When Triton crosses a major line and smashes Ariel’s hopes and dreams in front of her, breaking her heart, she responds by doing something stupid and insane in return: selling her soul and her voice to a witch so she can get some legs, move out of the house and live her life the way she chooses. And it goes exactly the way you’d expect it to (though it really was fun while it lasted). Ariel and her daddy’s feud almost dooms us all. Both of them pay the price for their actions and in the end, neither of them solve the Ursula problem. Eric has to bail them out. And Eric wouldn’t have been there if Ariel hadn’t rescued him earlier, so “The Little Mermaid” balances itself out quite nicely for me in terms of heroism and lessons learned. Eric learns that waiting for the perfect individual is foolish. If you spend all your time thinking about what could be, you could miss all the wonderful things in front of you. Triton learns that if you punish your kids by destroying their dreams, then you are a bastard and you feel ashamed of yourself. And Ariel learns that if your friends tell you not to sell your soul to someone, you fucking listen to them, or you’re an idiot, a suicidal idiot (turning to a witch for your problems never helps, as Merida also learned).

In conclusion, Ariel is one of my favorite Disney characters because she’s one of the most flawed and interesting both to watch (she darts around the sea, she sings like an angel, she combs her hair with a fork!) and to read into. Enjoy that honeymoon, girl.

* Remy and Ariel are two different characters, but they’re very much cut from the same cloth. In fact, Remy is actually a more arrogant character than Ariel, and makes many of the same mistakes she does, costing his entire colony their home and almost killing them because he couldn’t leave the humans alone, but you don’t see people calling him a stupid, spoiled, and ungrateful rat, do you? Perhaps there is something to the theory that female characters are judged more than harshly than male ones, including by other women.

This entry was posted in Character Analysis, Disney. Bookmark the permalink.